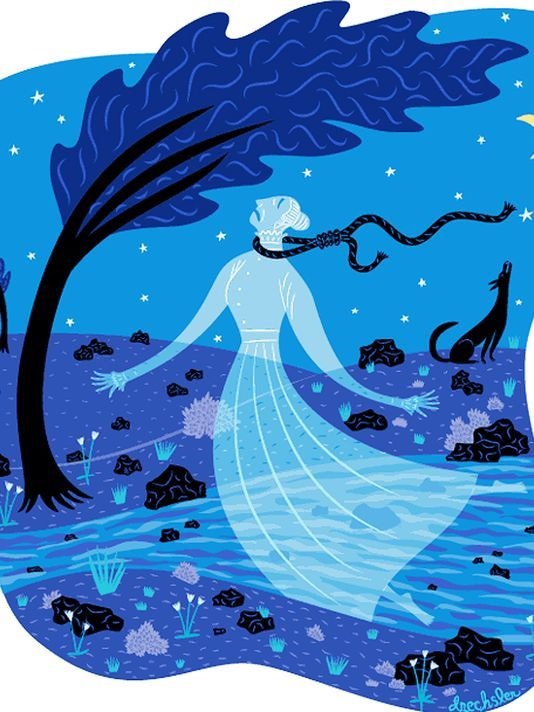 “No soy culpable (not guilty, I am not guilty).”

Those were reportedly the last words of legendary Texan Chipita Rodríguez, who at one time was thought to be the first woman hanged in Texas.

Today she is reported to roam the banks of the Nueces River and sometimes the Aransas River voicing a plaintive wail of sorrow.

Her death and legend are as pertinent to the state of Texas as that of the Alamo and Goliad stories. It was in death that Chipita Rodríguez beame part of Texas lore.

Her story, mostly based in fact, is as intriguing as any ghost tale ever told in the state.

Chipita was hanged in 1863 for murdering cotton merchant and horse trader John Savage with an ax and stealing $600 in gold from him. Savage’s body was found in the Nueces River north of San Patricio wrapped in a burlap sack.

Some records indicate she was born in what is now Texas in 1773, others that she was born in Mexico in 1799. Some believe her name was Josefa, but it cannot be verified. It is known her father was Pedro Rodríguez. There is no record of her mother’s name. Her father was believed to have abandoned the Mexican army during Santa Anna’s march to San Antonio in 1836, and that is when the family moved to the banks of the Nueces River near San Patricio.

Legend holds she married when she was 20 and had a baby, but her husband abandoned her and left with the baby.

After that, she lived on the banks of the Nueces and had a modest jacal (hut) that became a resting place for travelers who wandered the South Texas plains after the Texas Revolution and into the Civil War era. There, the travelers could find a cot or lay down their bed roll as Chipita would provide cooked meals, trying to make a living in the harsh sun-bitten and mesquite-laden terrain.

Savage was among those “guests” one fall night in 1863. He had been at the saloon in San Patricio bragging about his sale of horses to the Union Army. The Civil War was still raging, especially in South Texas and the Rio Grande Valley,  and this news was not welcomed in Confederate Texas. After a night of drinking, Savage drove over to Chipita’s hut and asked for a place to spend the night.  He was prepared a hot meal for a “peseta (quarter)” and told he could sleep in his bedroll in front of the hut.

The next morning, he could not be found. Two days later, two slaves found Savage’s dismembered body in a burlap sack by the river.

Sherriff William Means’ investigation led him to Chipita’s place and he arrested her, claiming the motive was greed, even though legend holds the saddlebags with the gold were found nearby.

Chipita refused to speak or could not defend herself in English.

She kept insisting, “No soy culpable ..."

Some felt she was protecting someone, perhaps Juan Silvera, who some sources claim was her illegitimate son and had recently arrived back at San Patricio. Both were indicted and tried in the 14th District Court under Judge Benjamin F. Neal, but only Chipita was found guilty, according to records.

The jury pleaded for mercy because of her age, but Neal sentenced her to death by hanging on Nov. 13, 1863. She was first held at Sheriff Means' home in Meansville, where two attempts by a lynch mob were thwarted. According to legend, Chipita was kept in leg irons and chained to a wall in the courthouse where she was later moved “for her safety.”

The tale of this woman who was unjustly hanged has inspired countless books, articles, poetry and even a southwestern opera. (Photo: Tejano Talks)
Soon, Chipita was taken to a grove of trees along the river and hanged from the tallest oak. She was buried in a coffin along the banks of the river under the tree from which she was hanged.

Shortly after her impromptu burial, the rumors started. One of the onlookers said he heard a moan coming from the coffin. Today, witnesses claim they have seen a shadow of a mournful woman gliding near where her jacal once stood, her cries echoing off the river banks and into the near mesquital.

In 1985, state Sen. Carlos Truan of Corpus Christi asked the Texas Legislature to absolve Chipita Rodríguez of murder. (Photo: Tejano Talks)
The tale of this woman who was unjustly hanged has inspired countless books, articles, poetry and even a southwestern opera. In 1993, the University of Texas music department performed the opera Chipita Rodríguez, composed by Texas A&M University-Corpus Christi professor Lawrence Weiner. In 2010 a screenplay was written by Del Mar College and Texas A&M University-Corpus Christi student screenwriter Cary Cadena. All acknowledged her cries of “No soy culpable!”

However, someone did hear Chipita’s cry. A historical marker in San Patricio details her tragic tale.

In 1985, state senator Carlos Truan of Corpus Christi asked the Texas Legislature to absolve Chipita Rodríguez of murder. The Sixty-ninth Legislature passed the resolution, and it was signed by Gov. Mark White on June 13, 1985. At last, her words “No soy culpable,” were heard. No recent apparitions of Chipita’s ghost have been reported.

Manuel Flores is a professor of journalism and communications at Texas A&M University-Kingsville and a former Caller-Times reporter.